My first triathlon was a disaster. It wouldn’t be an overstatement to say I almost didn’t make it out alive. As a triathlon newbie I naively thought open water swimming was just like swimming in an indoor pool. Boy, was I wrong…really wrong! 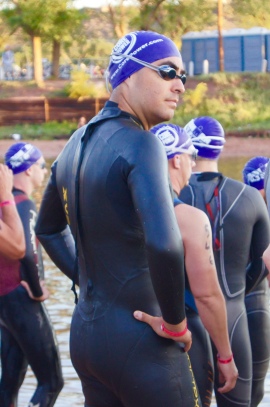 I had spent months of preparation in the pool. My fitness level was strong enough to complete the 1500 meter lake swim. However, on race day, as I jumped into the cool lake water, I couldn’t feel the bottom, so I panicked. I struggled to the top of the water, popped my head up to take a breath, and gasped for air. The start gun went off and my fellow competitors swam towards the first bouy. I was left feeling very cold and I couldn’t slow my breathing. Shivering, I frantically tried to keep my head above water. I moved only inches with a shortened breaststroke. I grew scared and quickly tired. I couldn’t calm down. I called out for help and a kayak came to my aid. I held on tightly but still couldn’t relax. I made a second attempt at trying the swim, but the short, quick gasps wouldn’t stop, so I found a second kayak to hang on to. After a couple of minutes, I tried a third time to get my stroke, but couldn’t quell my intense anxiety. As a third kayaker saw me, he asked if I was okay. I told him I wasn’t. I felt so cold and couldn’t breathe normally no matter what tactics I tried. At that moment, about two football fields from the shore, I thought that I was going to need to quit. And the only way to get back to shore was with a lifeguard. I was scared for my life and discouraged. How could I, after all my preparation, have a panic attack in the water?

As I was hanging on to a third kayak telling the lifeguard how cold I was, a swimmer with a wetsuit swam up to that same kayak shouting he was too hot. From nowhere, this stranger asked if I wanted his wetsuit. I said “YES!” I put on his wetsuit in the middle of the lake on the back of jet ski. Knowing I wouldn’t drown because of the wetsuit’s buoyancy, I was finally able to calm down, get into a rhythm and finish the swim course (in a super slow 53 minutes). With God’s help through a generous stranger, I’m still alive.

I wish I could say that was the last time I had a panic attack in open water, but it wasn’t. I had that same experience multiple times after. I had to figure something out. I had to figure out how to not panic.

According to the Anxiety and Depression Association of America, a panic attack is “the abrupt onset of intense fear or discomfort that reaches a peak within minutes and includes palpitations, pounding heart, trembling, shortness of breath, chill sensations or feelings of choking.” That’s what I experienced. Although most athletes won’t experience that level of of intense anxiety, all will experience some degree angst. After all, who isn’t a little nervous before a game.

The problem with anxiety in sports is that it keeps the player from performing their best. Because their mind is distracted, they aren’t able to fully focus on the task at hand, and depending on how a person is wired, fear will produce some kind of fight or flight reaction.  Anxiety in athletes may cause one to take a cheap shot when the ref isn’t looking. In others, it may cause them to hold back or stop trying because they are afraid to fail.

So if anxiety is a real problem in sports and no athlete ever wants to waste their hard work of preparation, then what is the remedy? How does one keep from panicking?

SOLUTION: TELL YOURSELF THE TRUTH

Volumes have been written in the field of sport psychology. In the July 2015 edition of Runner’s World Magazine, an article called “Train Your Brain” suggested having a go-to phrase you can repeat that can help you push through tough parts of workouts and races. A lot of runners fall into the trap of having a negative mantra like “Don’t stop”. That runner is creating a mindset to avoid failure versus a runner who will say something positive like Power Up.” That’s good advice, yet there is something even more foundational. There’s a timeless truth that applies to all athletes that will settle one’s nerves. Internalized, this truth will produce a power that will not only keep one from panicking, but will provide a freedom to perform to the best of one’s ability.

In the first century, the apostle Paul was walking through the ancient city of Athens. While  noticing the city was full of idols his spirit was provoked, so he stood in the midst of the most influential public forum of the day, the Areopagus, and delivered a speech recorded in Acts 17:22-34. In the heart of his speech, he said that God made man, appointed when and where he would live, so that they should seek God. Then comes this line,

When I read that verse in light of my open water swim panic attacks, the light bulb went on. I remembered that it is because of God that I live, that I move, and that I exist. I’m not a self-sustaining individual. God sustains my breathing. God keeps all my physiological systems in order. My arms can move because of Him. The red bloods cells travel through my body because of Him. My lungs function because of Him. My eyes see where I’m going because of Him. All of the muscular movements, voluntary and involuntary, required to swim, work because of His design. And in a very real sense, I can’t drown unless it is my appointed time to die.

Many athletes will look to other scripture verses for motivation and clarity during performance, such as 1 Corinthians 9:24-27 or 1 Timothy 4:7-8. However, I haven’t come across anyone thinking that Acts 17:28 could be applied to athletic performance. Yet it does. When we remember that it is from God that we live and move and have our being, we can relax emotionally. Any ability to throw, jump, hop, kick, slide, or run comes from Him. The breath that fills our lungs, He designed. The miraculous fibers of slow and fast twitch muscles, God designed. The connective tissue linking my toes to my hamstrings come from Him. Truly, it is in Him that I live and move.

Kinesiology is the study of the movement of the human body. Those in that discipline of learning study the subject of God, whether they realize it or not.

The next time you step into the athletic arena, repeat this: In Him I live and move and have my being. Let this become your go-to phrase when the nerves come or the difficulty increases. Before play begins, remind yourself of this truth. During competition, repeat this mentally. Over time, you’ll find yourself more relaxed and playing up to your potential.

This is one truth we can’t afford to live without. Internalize this truth and it’ll keep you from panicking. Let your mind focus on this truth and you’ll soon be playing your best!